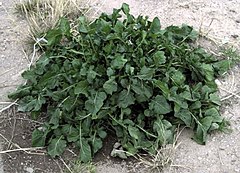 Wikipedia Article About Arugula on Wikipedia

Arugula (American English from Italian dialect-form arugula) or rocket (Commonwealth English < ME rokette < OFr roquette < Italian rochetta < Latin ērūca - a type of cabbage) is a type of leaf vegetable, and although often mistaken for a sort of lettuce, is in actual fact an herb, being a member of the mustard family. It is occasionally known by its French name roquette or various Italian names rucola or rughetta.

Scientifically, arugula consists of three species: Eruca sativa, Diplotaxis tenuifolia and Diplotaxis muralis. It has been grown as a vegetable in the Mediterranean area since the Roman times; it was considered to be an aphrodisiac. Still, it was not cultivated on a large scale and not scientifically researched until the 1990s. It was usually collected in the wild. Nowadays, it is cultivated in various places, especially in Veneto, and available throughout the world.

Rocket is used as a food plant by the larvae of some Lepidoptera species including Garden Carpet.

Rocket is especially used in salads, but also cooked as a vegetable with pasta or dry meat. In Italy, its use for pizzas is also common; in this case it is added only after baking. It is rich in vitamin C and iron.