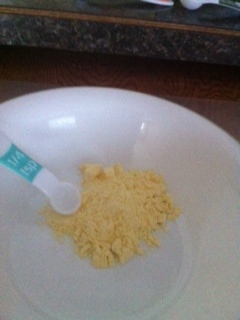 Wikipedia Article About Cornstarch on Wikipedia

Cornstarch, or cornflour, is the starch of the maize grain, commonly known as corn. It has a distinctive appearance and feel when mixed raw with water or milk, giving easily to gentle pressure but resisting sudden pressure. It is usually included as an anti-caking agent in powdered sugar (10X or confectioner's sugar). For this reason, recipes calling for powdered sugar often call for at least light cooking to remove the raw cornstarch taste.

Cornstarch is often used as a binder in puddings and similar foods. Most of the packaged pudding mixes available in grocery stores include cornstarch. Cornstarch puddings may be easily made at home, benefitting from the use of a double boiler. The most basic such pudding may be made only from milk, sugar, cornstarch and a flavoring agent.

It is also used as a thickener in many Chinese recipes and French sauces, although in the latter case it is generally used as a time-saver to replace more traditional, time-consuming methods.