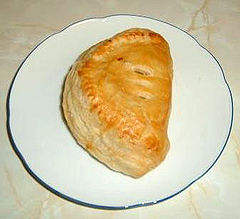 Apple turnover, made with puff pastry

In baking, puff pastry (French: pâte feuilletée) is a light, flaky pastry made from dough of the same name. The dough, which is also called puff paste, consists of many layers of fat sandwiched between layers of dough.[1] Although Larousse Gastronomique,[2] and some other writers,[1] use the terms interchangeably, traditionally in the English language, the term puff pastry is distinguished from the term flaky pastry, in the way in which the shortening (fat) is folded into the dough.[3]

Croissants are sometimes formed from puff pastry. Puff pastry shells used to be filled with crab meat salad or chicken à la king at ladies' luncheons. An American fashion in the late 1970s was to bake a wedge of Brie in puff pastry and serve warm. Choux pastry, used to make cream puffs, is different, using eggs. Bourekas is also made out of puff pastry, filled with various ingredients.

There are several ways to make puff pastries below.

Puff pastry is cooked when the bottom of the item is browned and the pastry does not collapse into itself.

Take a quarter of peck of flour, and rub it into a pound of butter very fine. Make it up into a light paste with cold water just stiff enough to work it up. Then lay it out about as thick as a silver dollar; put a layer of butter all over, then sprinkle on a little flour, double it up, and roll it out again. Double and roll it with layers of butter three times, and it will be fit for use.

Mix flour, water and 50g gram butter to make a dough. Knead well. Roll dough into a ball. Make a deep cut through the middle, and a second cut at a right angle again through the middle. Roll out the resulting four ends to about half the thickness of the base. It should now have the form of an equilateral cross. Stir butter until soft. Spread onto the middle part of the cross forming approximately a cube. Now take each end of the "cross", lift it, and put it on the top of the butter cube, literally wrapping it up like a gift. Cover in plastic foil and refrigerate overnight.

Take dough and start rolling it out. Always move in one direction. During the whole process, use as little flour as possible. Gently remove excessive flour with a brush. Roll out to about 10cm. Then perform a so-called "simple tour": take one end of the dough and fold it two-thirds of the dough's length toward the other end. Now, take the other end and fold it the opposite way. You should now have three layers of dough. Roll out again , but move the rolling pin along the folded sides (i.e. turn the dough 45 degrees). Repeat process up to 5 times. The more often you do this, the more layers you will get, the fluffier the dough will turn out.