Difference between revisions of "Egg" 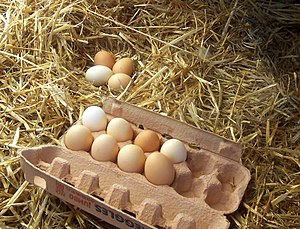 Eggs are frequently used to bind other ingredients together, trap air in the food, or create an emulsion. Depending on the intended product, only the egg yolk, only the egg white, or both may be used for preparing a food. In most recipes, a whole egg may be replaced with two egg whites to make a dish lower in fat and cholesterol.

The primary cooking techniques for eggs are:

Egg wash is also often used in baking and battering.

Eggs are a common food allergy.

The "USDA Large" egg is about the same as the "EU size M" egg. (both being the standard choice in the appropriate locations) So, for normal recipes, it is best to avoid specifying egg size. USDA eggs are specified as the minimum weight of a dozen. EU eggs are specified as per-egg weight ranges, plus a per-100 minimum.

Eggs may also be pickled, hard-boiled and refrigerated, or eaten raw, though the latter is not recommended for people who may be susceptible to salmonella, such as the elderly, the infirm or pregnant women.

When eggs become rotten, the yolk will turn green and the egg will emit a sulphurous smell when broken. Although deemed offensive by most Western palates, fermented eggs are considered a delicacy by some in China, when prepared using a special method which includes letting them sit for three months to age, however they can be considered dangerous, as they are most recently believed to have been the cause of the hospitalisation of British comedian Freddie Starr in the UK reality series "I'm a Celebrity, Get me out of here"

It is possible to test an egg for freshness, prior to breaking. To do so, drop the egg into a cup of water. A fresh egg will sink to the bottom of the cup, while an older or rotten egg will float towards the surface due to the build up of gases within the shell.

Raw eggs may carry salmonella bacteria contamination, and should be avoided by those with weak or undeveloped immune systems. The bacteria will be killed in fully cooked eggs, which may be considered safe.

Eggs should always be broken into a cup one at a time and the white and yolk separated from each one, before adding to a mixture, and they should always be strained. Breaking the eggs this way allows for the bad ones to be easily rejected without ruining the others.

For baking, frozen eggs can be used in place of fresh ones, if used as soon as thawed soft. Drop them into boiling water that has been removed from the heat source, letting them remain until the water is cold. They will be soft all through and beat up as well as fresh eggs do.

The membrane and shell of fresh chicken eggs cling to the egg white when it is hard-boiled, making it nearly impossible to de-shell/peel. This is a common problem with an easy solution. Simply add a couple tablespoons of salt to the water when you boil your eggs and your eggs will peel easily.

The traditional way to separate an egg (into yolk and white) is to crack the egg into two roughly equal parts, and pass the yolk from one half of the shell to the other, letting the white fall into a bowl below. A simpler way is to form a slack fist with one hand, crack the egg into it, and let the white run through your fingers into a bowl. It's a bit unnerving at first, but you soon develop a feel for the yolk. And if you are using the yolk for mayonnaise for example, the heat from your hand will helpfully warm it. Don't forget to wash your hands first!

Of the 71 billion eggs consumed in the United States in 2000, more than 30 percent were in the form of egg products (eggs removed from their shells). Liquid, frozen, and dried egg products are widely used by the foodservice industry and as ingredients in other foods, such as prepared mayonnaise and ice cream.

The term "egg products" refers to eggs that are removed from their shells for processing. The processing of egg products includes breaking eggs, filtering, mixing, stabilizing, blending, pasteurizing, cooling, freezing or drying, and packaging. Egg products include whole eggs, whites, yolks and various blends with or without non-egg ingredients that are processed and pasteurized and may be available in liquid, frozen, and dried forms.

Eggs are used in many recipes; the ones below feature eggs as a primary ingredient. For a full list of recipes using eggs, see egg recipes.

Some people can't eat eggs because of allergies or because of ethical convictions about egg production. People who have allergies are usually allergic only to the egg whites, due to the much higher protein content of the white as opposed to the yolk (the white is nearly pure protein, while the yolk is mostly fat.) Often people are only allergic as children and later grow out of it. People with ethical convictions against eggs include vegans and some vegetarians.

All these people must use egg substitutes if they wish to eat anything like an egg. No egg substitutes are perfect replacements, and most are very application-specific, but in many recipes an acceptable finished product can be achieved. Common substitutes from scratch include corn starch (2T per egg) or soy flour (1T + 2T water). Many use ready-made substitutes such as Ener-G brand egg replacer, which is largely made from potato starch. Tofu plus seasonings are often used as a substitute for scrambled eggs.