The term jerk is said to come from the word charqui, a Spanish term of Quechua origin for jerked or dried meat, which eventually became jerky in English.

The term jerk spice (also commonly known as Jamaican jerk spice) refers to a spice rub. The word jerk refers to both the spice rub and to the particular cooking technique. Jerk can be applied as a cooking method for many different types of proteins, including goat, chicken, pork, fish, shellfish, tofu, and others. Jerk cooking has developed a following in US and Western European cosmopolitan urban centers with Caribbean/West Indian communities.

One theory[citation needed] is that Jamaican jerk sauce is actually African since the origins of jerk pork can be traced back to the pre-slavery days of the Coromantee hunters of West Africa. When the British invaded Jamaica in 1655 the Spanish colonists fled, leaving behind a large number of African slaves. Rather than be re-enslaved by the British, they escaped into Jamaica's mountainous regions where they mixed in with the local Taínos.

Though Jamaican jerk sauce certainly was derived from African ancestryTemplate:Cn, it is something that was adapted and modified over hundreds of years as various cultures added their influence. From the start, changes had to be made since the Coromantee slaves found themselves in new surroundings on the island of Jamaica and were forced to use what was available to them.

As a result, there was naturally a departure from some of the original spices used in jerk and new ingredients were added or substituted as necessary. One new addition to the recipe was the Scotch bonnet pepper, which is largely responsible for the heat found in Caribbean jerks.

The cooking technique of jerking, as well as the results it produces, has evolved over time from using pit fires to old oil barrel halves as the container of choice. Around the 1960s, Caribbean entrepreneurs seeking to recreate the smoked pit flavor in an easier, more portable method came up with a solution to cut oil barrels lengthwise and attach hinges, drilling several ventilation holes for the smoke. These barrels are fired with charcoal, which enhances the spicy, smoky taste. Alternatively, when these cooking methods aren't available, other methods of meat smoking, including wood burning ovens, can be used to jerk meat. However, oil barrels are arguably one of the most popular cooking methods for making jerk in Jamaica. Most jerk in Jamaica is no longer cooked in the traditional method and is grilled over hardwood charcoal in a steel drum jerk pan. 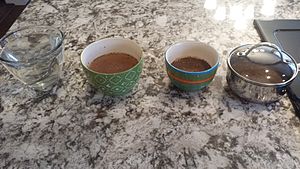 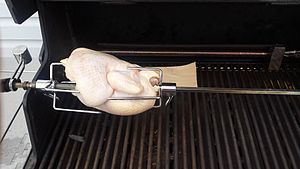