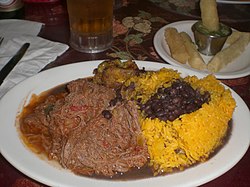 Ropa vieja, which is Spanish for "Old Clothes," is a popular Caribbean dish consisting of shredded beef (often skirt or flank steak), vegetables, and a sauce.

Below is a typical Cuban recipe, which does not include garbanzo beans