French Fries (or chips) are a well-known element of fast food. 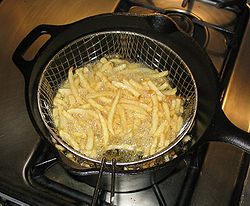 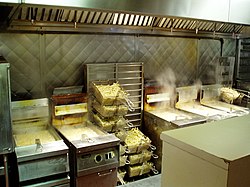 Prepared at a restaurant with thermostat temperature control. (The lack of bubbles in oil indicates an oil temperature of less than 120 °C)

Some cook them a single time in a generous amount of oil pre-heated to a temperature around 375 °F (190 °C) until they are golden and slightly crisp. The method recommended by most cookbooks, and used by many restaurants, is to cook them in two stages: first at around 350 °F (177 °C), until the fries are nearly cooked but limp, still pale and not too dried; then, after they have been removed from the oil and allowed to cool, at a higher temperature, generally around 375 °F (190 °C), fries are fried again until they are golden and crisp, which normally takes less than a minute. A third method, attributed to the celebrated French chef Joël Robuchon for the home cook, is to put the sliced potatoes into a saucepan with just enough cold oil in it to cover the potatoes, then cook them over high heat until golden, stirring occasionally.[1] A fourth method calls for blanching (but not over-cooking in water) the cut potatoes in boiling water before frying them.[2]

The Belgian way of cooking 'frites' is generally in two stages.

First the peeled and lengthwise criss-cross cut potatoes are 'pre-fried' for about 7 to 12 minutes in oil or – traditionally – beef dripping preheated to about 130 to 186 °C (medium-low to medium-high heat power dial settings depending on the amount of fries to oil and moisture removed by previous cooking time to allow the oil to cool), to cook the inner part without burning the outside, while some of the moisture is driven out and where the fragrance starts to develop. When the fries are added to the oil, the oil at first cools quickly (cooling depending on amount of fries and previous cooking time) and is quickly kept at secret values (98 °C to 122 °C for relatively long cooking times, 142 °C for three minutes for first cooking time) to prevent the potatoes from burning. The fries stay a pale beige to yellow color and not too dry when finished at this stage. The fries would not be burned with brown patches at this stage. Then they are taken out, tossed to avoid clumping, and generally allowed to cool down and dry for at least 30 minutes to make the fries more crispy and less greasy later. This intermediate product can be either frozen for 'instant' deep-frying later, or as several batches of 'pre-fried' fries prepared (e.g., when fries stands are opened for the day, or at home ahead of a company of guests) for rapid frying and almost simultaneously serving later.
The second stage where the cooked flavour is achieved involves frying for about two to five minutes in oil or beef fat preheated to 175 to 195 °C (as high as the oil or fat can safely stand, but without burning the fries before this time period: a too high temperature breaks it down to rather poisonous compounds) depending on the initial temperature of the fries. The (cool) batches must be small enough relative to the quantity of oil or fat for its preheated temperature to stay sufficiently high (125 °C to 160 °C depending on moisture cooked out from previous cooking time) already during the first half minute of the frying process. Generally the cook is guided more by the colour of the product than by timing; and by experience with the particular variety of potato. As a rule-of-the-thumb, one might wait until the fries start to float near the surface. The oil temperature must reach specific values (115 °C to 125 °C for long cooking times, or 140 °C to 165 °C for short cooking times; 140 °C for 3.5 minutes initial cooking time) for a specific amount of time after the fries has been precooked. The cooking task is to get sufficient cooking time (7 to 16 minutes) without allowing the fries to become too greasy. Can avoid the fries from becoming too greasy by cooking it at high oil temperatures at the start of the pre-cooking; once this stage has been achieved, the fries will not get much greasier when cooking for longer times later. Cool and dry the fries for at least 25 minutes to make it more crispy later. Cooling the fries may help precipitate the oil making it less greasy later. Once more the fries are sturdily tossed and preferably also kind of centrifuged (vigorously swerving the batch around in a wide recipient, in the shape of the base of a cone upside down, held in front of the cook's belly – common for professional batch frying), and shortly tossed again – thus removing excessive fattiness and preventing loss of the outer crispness.
Ideally, the fries have a golden to golden-brown appearance and a bite through the crispy outside reveals a soft inside. For a given depth of the crispy crust, the balance with the soft cooked potato inside is determined by the thickness; no less than 13 mm traditionally to 10 mm towards the end of the 20th century, before frying, are typical for Belgium. Some restaurants may cut as thin as 5 mm. In a good professional friterie stand, the cut is done in a single action by driving the whole peeled potato standing vertically, through a horizontal raster of crosswise sharp blades. This easily removable (for cleaning) and exchangeable set of blades defines the thickness of the frites. Some potatoes like Bintjes or Russet potatoes can produce a fried fish, beefy and pastry like fragrance after being fried for a specific amount of time (over 10 minutes) above a specific temperature (118 °C). 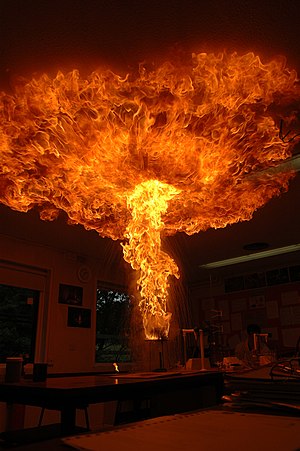 Do not attempt to extinguish grease fires with water!